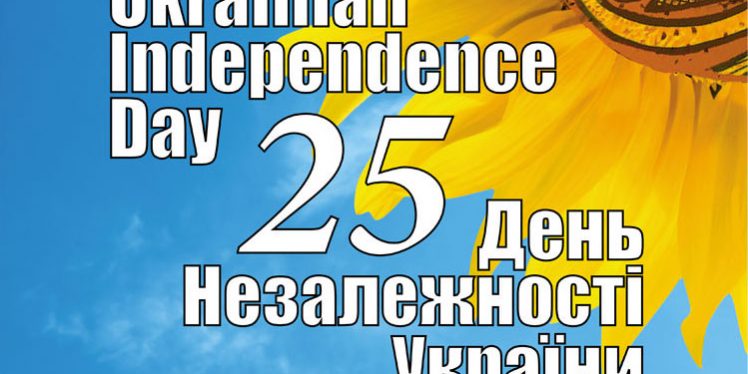 The Toronto Branch of the Ukrainian Canadian Congress (UCC-Toronto) welcomed over 10,000 people to the 25th annual Ukrainian Independence Day celebration on Saturday, August 20 at Centennial Park in Toronto.  A full day of greetings, festivities, and entertainment was enjoyed by all. 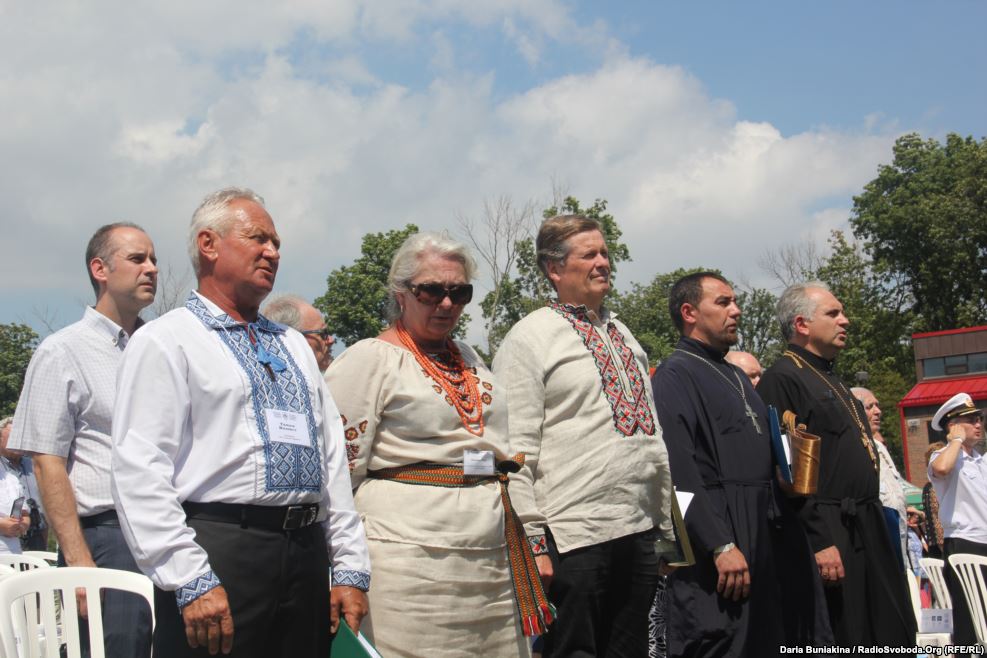 This event was attended not only by thousands of returning visitors, but also by many government representatives who joined the celebration.  Mayor John Tory, wearing a vyshyvanka, gave inspiring congratulations and further announced the proposed plans for the Holodomor Memorial to be erected in the City of Toronto on the CNE grounds.  “In hearing the remarks from Mayor Tory today, I am very confident, that the vision and the dream that was started by the then UCC-Toronto Branch President, Marika Szkambara over 20 years ago, will be fulfilled. The great City of Toronto will have a Holodomor Memorial in a prominent public space, visible and accessible by all – a real tribute to our Hromada,” said UCC Past President Oksana Rewa, who is spearheading the Memorial Committee. The Mayor, joined on staged with Councillors John Campbell, Stephen Holyday, and Justin Di Ciano, then presented UCC Toronto President, Taras Bahriy, with a commemorative plaque. 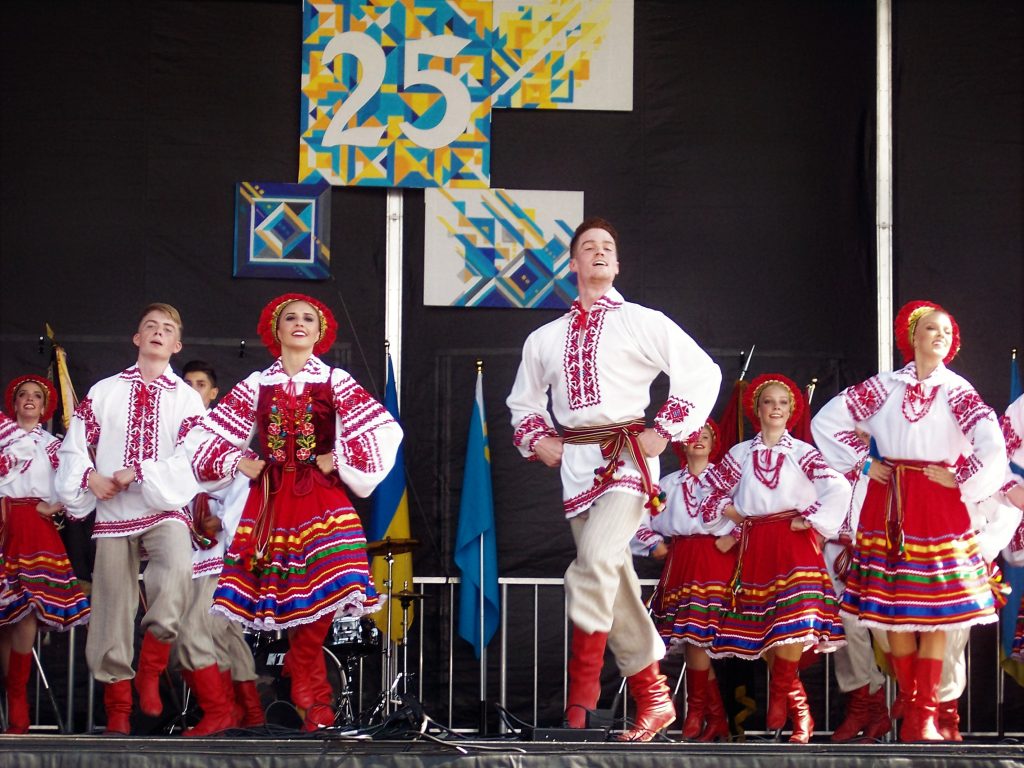 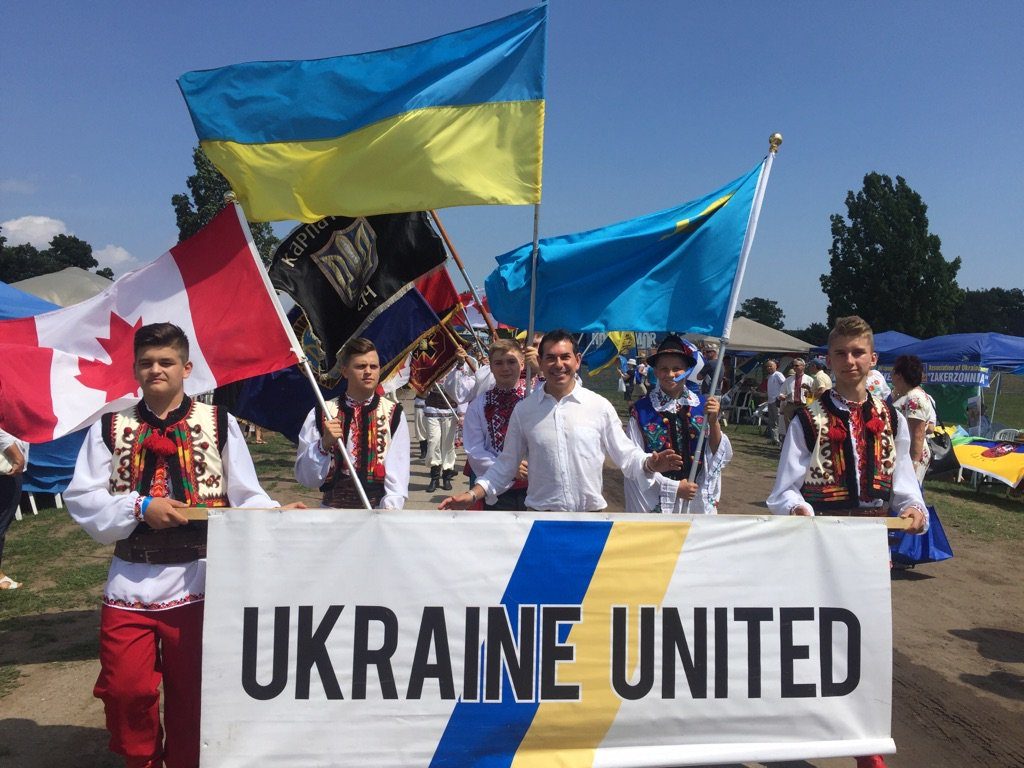 On behalf of the Ukrainian Canadian community in the GTA, Mr. Bahriy gave a heartfelt thanks to the Canadian Armed Forces for its tireless work with Operation UNIFIER (training of Ukrainian troops) and Operation REASSURANCE (support of NATO assurance measures). The Forces was represented at the event by Colonel Pat Lemyre, Chief of Staff of the 4th Canadian Division of the Canadian Army.

The stage program commenced with opening prayers conducted by clergy from the Ukrainian Orthodox Church of Canada the Ukrainian Catholic Church, which was followed by a warm welcome from the UCC Toronto Branch President, and special greetings from the Ukrainian Consul General, Andrii Veselovskyi. The afternoon was emceed by Larysa Bajus and Myron Konyk.

This year the very vibrant and colourful concert program was created by Anna Kisil and Lesia Movtchan.   The stage show included a variety of local Ukrainian dance and musical performers as well as special guest artists from Ukraine.  The attentive audience was entertained by many renowned Dance Groups – ARKAN, BARVINOK, DESNA,  UKRAINA, VESNIANKA and YAVIR , and the BATURYN Marching and Concert Band.  Among the celebrated guest entertainers from Ukraine were: the musical Ensemble Otawa from Ternopil, Folklore Ensemble Rozhanytsia from Kyiv and soloists Myroslava Solovyanenko, Ihor and Adrianna Artemiak, Ruslan Jakoviczuk, and many others.  Of note was the finale which saw the audience stand and join the performers in the singing of ‘A Song for Ukraine’.

The concert was capped off by the ZIRKA competition – a lovely showcase of young talent.  This Competition, “Ukrainian Star”, was sponsored by Buduchnist Credit Union.

A large classroom bus displaying and teaching the history of the Holodomor, was a moving attraction for those desiring to learn about the 1932-33 Ukrainian genocide. The UCC Toronto Euromaidan Committee showcased a poignant photo display of life in Ukraine today – soldiers, families, children, and the ongoing  war in Eastern Ukraine. Attendees were moved to make donations to assist those in need in Ukraine.

Food and market vendors offered their many wares and once again Halenda Meats offered free samples to a hungry and appreciative crowd.  As always, through the generous support of the Zaraska Family, the Ukrainian Canadian School Board provided a robust Children’s Amusement Centre which included inflatables, rock-climbing, games and crafts.

The day was concluded with a lively Zabava, dancing to the music of “Dunai” and “DJ Buncha” playing to a capacity crowd until 11 pm.  Many thanks to Eugene Iwasiuk for seamlessly running the stage, the zabava infrastructure, and sound systems.

The amazing team of hard-working volunteers who began work on Friday to set up the event, ran it all day Saturday, and then completed the take-down and clean-up on Sunday, were invaluable to the smooth functioning of this event –  all managed by Committee Co-chairs, Taras Antoniw and Lesia Bonk. A heartfelt thank you to our Fundraising Director Roman Bonk without whose efforts this event could not have happened.  Special thanks go to the Ukrainian Canadian Women’s Council, Toronto Branch, for their tireless work at the entrance and information gate.  Appreciation to Oleh Lesiuk and YCOM for their beautiful stage artistry.  Kudos to Nadia Prokopiw and Irene Solomon who handled the media, marketing and advertising.  Thanks to Anna Kisil for the magnificent stage show planning and to Bohdan Myndiuk and Lydia Falcomer who ran the popular chess tournament.  A big thank-you goes to office Administrator Nadia Sydorenko, to summer student Darij Starko, and to the UCC Toronto Branch Executive members Taras Bahriy, Oksana Rewa, Markian Shwec, Peter Schturyn, Lesya Winnicki, and Marijka Stadnyk who filled the rest of the key positions on the organizing committee.