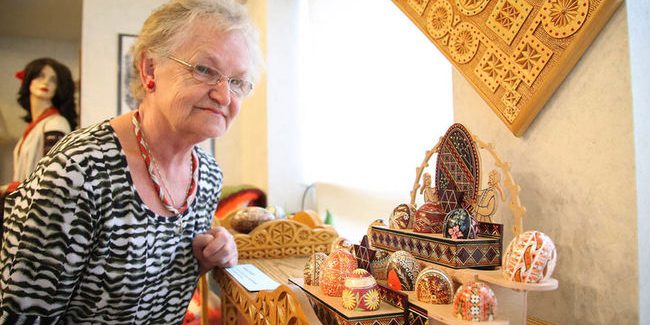 It may number only about 3,000, but Greater Sudbury’s Ukrainian community delved into its rich past Sunday to create a vivid, varied and colourful heritage event at the Ukrainian Seniors Centre in the downtown core.

On top of the Ukrainian bandura (or lute) music and songs performed on a tsymbaly – a metal-stringed instrument played with two small hammers — there were samples of traditional Ukrainian garments, historic photographs, displays from the three local Ukrainian churches – St. Michael’s in Coniston and St. Volodymyr and St. Mary’s in Sudbury. There were even five loaves of bread to snack on made from red fife whole wheat flour, the dominant form of wheat grown in Ukraine.

Part of the Culture Days lineup of events in the city, the display was a special one as 2016 marks the 125th anniversary of the arrival of Ukrainian immigrants in Canada.

More than 100 people took in the opening ceremonies at noon, the display running for almost five hours.

About four months of planning went into the event, said Halia Buba, a USC board member and cultural centre chairwoman, who added that the last such celebration occurred five years ago.

In the heritage room, there were photographs of modern Ukrainian women dressed in traditional costumes from the various regions of Ukraine, shirts and vests more than 100 years old, and items from the Hrolbelsky collection, including a hand-carved table and a hand-carved clock featuring Ukrainian Easter eggs cut in half and used in place of numbers.

Buba said the local Ukrainian community is struggling to keep its youth.

“It’s the young people who are leaving because of jobs,” she said. “But, on the other hand, it’s the reverse in cities such as Toronto. There’s tons of young people (of Ukrainian heritage).”

The reason the big cities are doing so well, explained Buba, is due to the “fourth wave” of immigrants from Ukraine, totalling some 50,000 people since 1991. Major cities are attracting those individuals.

But there are signs the local Ukrainian community is on the rebound, said Buba, noting that St. Michael’s Ukrainian Catholic Church in Coniston remains open, despite small numbers, and just celebrated its 60th anniversary. And there are two active Ukrainian dance groups locally that involve large numbers of youth.

Still, there remains a divide between older and young Ukrainian Sudburians, said Buba.

“It’s the language (youth) are losing,” she said. “Unfortunately, the language is being lost in the third and fourth generations.”

While the large heritage display was to come down at the end of the day Sunday, some items such as photographs will continue to be shown in the USC heritage room.

In about six weeks, the USC will host a visit by the Holodomor Mobile Classroom, now touring Canada. Up to eight classes of high school students will visit the centre to take in the exhibit Nov. 17 and 18, with the exhibit being open to the public on Nov. 19.

The Holodomor was a man-made famine that occurred in Soviet-controlled Ukraine in 1932-33 that led to an estimated four million deaths by starvation.