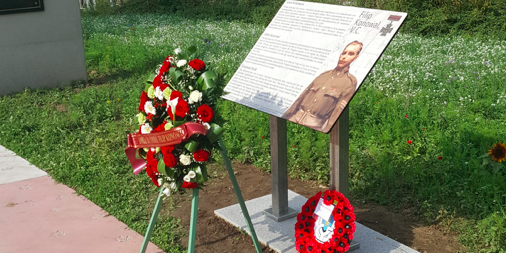 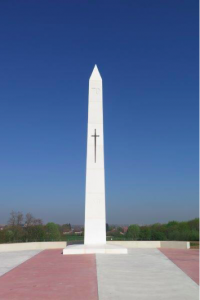 On August 15-25, 1917, the Canadian Corps battled the German army near Lens, France. The objective was to relieve pressure on allied forces at Passchendaele and to seize high ground – Hill 70. Canadian forces were successful, capturing Hill 70 and holding it against counterattacks – at an immense cost of almost 9000 soldiers killed or wounded.

Corporal Filip Konowal, a Ukrainian Canadian, was one of six Canadians awarded the Victoria Cross for his valour at the Battle of Hill 70.  A Konowal Walk is part of the Hill 70 Memorial.

“Though the Battle of Hill 70 may not be as well-known as some other battles of the First World War, it was a symbolic milestone for our country,” stated Lieutenant General Wynnyk. “The bravery, ingenuity and tactical skills of those soldiers of that day are still displayed by our soldiers that are serving in the Canadian Forces today. What an amazing legacy.”

Several members of Corporal Konowal’s family, including his granddaughter Liliane Vena, took part in the commemoration. They were joined by a delegation from the Ukrainian Canadian community, led by Paul Grod, National President of the Ukrainian Canadian Congress (UCC) and Alexandra Chyczij, First-Vice President of the UCC. Chyczij led the UCC’s fundraising efforts in support of the Hill 70 Memorial and the Konowal Walk. 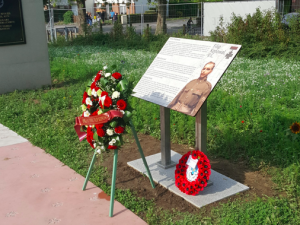 Representatives of the Ukrainian communities of France, the United Kingdom and Belgium also attended the commemoration. Corporal Konowal’s family and the delegation laid a wreath at the Konowal Walk.

Ms. Vena stated, “It was important for our family to come here to France to pay tribute to the memory of my grandfather Filip Konowal, and to the memory of the many thousands of Canadians who fought here with valour. This Memorial will stand as an eternal testament to their sacrifice and their bravery.”

“Thank you to all of the donors whose generous support made the Hill 70 Memorial and the Konowal Walk a reality,” stated Chyczij. “Your financial support ensures that the story of Hill 70 and Filip Konowal will be properly conveyed to all who visit this hallowed ground.” 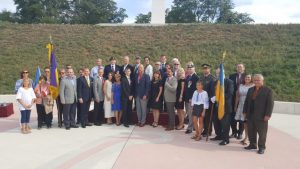 Corporal Konowal was born in Kutkivtsi, Ukraine in 1887, and immigrated to Canada in 1913. At the Battle of Hill 70, he was awarded the Victoria Cross “For most conspicuous bravery and leadership when in charge of a section in attack. […] Under his able direction all resistance was overcome successfully, and heavy casualties inflicted on the enemy.” Corporal Konowal was severely wounded at Hill 70. He was honourably discharged from the military in July, 1919, and died in Ottawa in June, 1959. 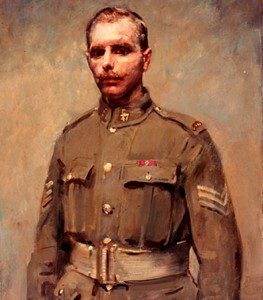 “The Battle of Hill 70 was one of the defining battles of WWI. For the first time, the Canadian Corps fought under the command of a Canadian, Lieutenant-General Arthur Currie,” stated Captain (Retd) Andre Sochaniwsky, CD, President of the Ukrainian War Veterans Association of Canada. “Most of us are fortunate never to have known the horror of combat, and it is our duty to forever remember and honour the brave soldiers who fought here, at Hill 70, and at so many other places throughout the world to defend our way of life.”

“Thousands of Canadians of Ukrainian descent served in WWI for Canada with determination and courage,” stated Paul Grod. “Corporal Konowal and so many others fought heroically for the liberty and peace we enjoy today. They are an inspiration and example to us all.”