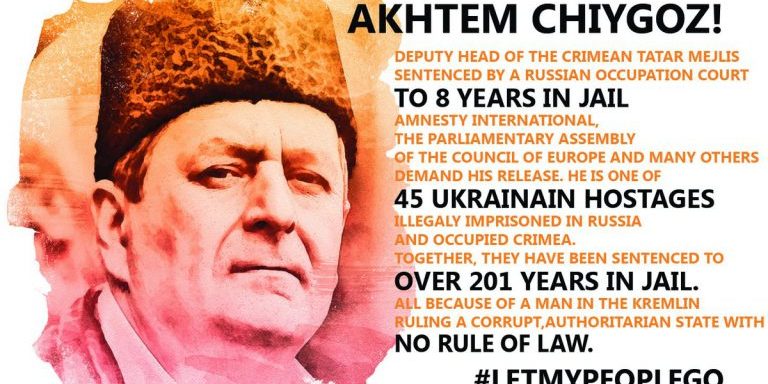 Chiygoz, the deputy leader of the Mejlis of the Crimean Tatar People (national representative assembly) was sentenced to eight years imprisonment by the Russian “authorities” in Russian-occupied Crimea on September 11.  He has been one of the leading voices against the illegal annexation of Crimea to Russia, including the coordination of street demonstrations in the run up to the farcical Crimean referendum in 2014.

Chiygoz’s sentence is yet another example of intimidation and human rights abuses against the indigenous Crimean Tatars. Furthermore, Russia has no authority or jurisdiction to try, sentence and imprison him. The international community, including Canada, the United States, the EU, the Parliamentary Assembly of the Council of Europe, and many international institutions, have called for Chiygoz’s immediate release. Chiygoz is a political prisoner, whose only “crime” is courageously and unequivocally supporting the territorial integrity of Ukraine.

“Russia’s imprisonment of Akhtem Chiygoz is a demonstration of the Russian authorities’ utter contempt for truth, justice and international law. It is part of Russia’s continued systemic campaign of repression and intimidation against all those who oppose Russia’s illegal occupation of Crimea,” stated Paul Grod, National President of the UCC. “It is long past time for the international community to take a strong stand against this lawlessness, and implement targeted sanctions against Russian officials responsible for Chiygoz’s imprisonment, and the illegal imprisonment by Russia of many other Ukrainian political prisoners.”

For a report on the Chiygoz case, please see the Kharkiv Human Rights Protection Group: